Menu
Back to All Itineraries

Chisago Lakes is often noted for its Scandinavian heritage, especially the world-famous series The Emigrants, written by Swedish author Vilhelm Moberg in the 1940s. Moberg’s stories follow a fictional family who settled in this region. Read on to experience your own version of “The Emigrants” journey in Chisago Lakes!

Considered one of Sweden’s greatest 20th-century writers, Vilhelm Moberg created Karl Oskar and Kristina Nilsson to portray the joys and tragedies of daily life for early Swedish pioneers in America. First published between 1949 and 1959 in Swedish, they are described as “a series of novels about poor Swedes who emigrate from Småland, Sweden, in the mid-19th century and make their home in Minnesota.” Much like many American students are required to read Little House on the Prairie, many Swedish students are required to read The Emigrants. 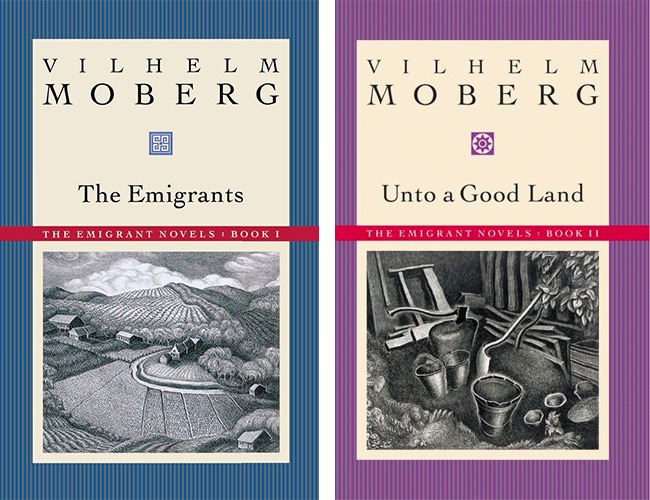 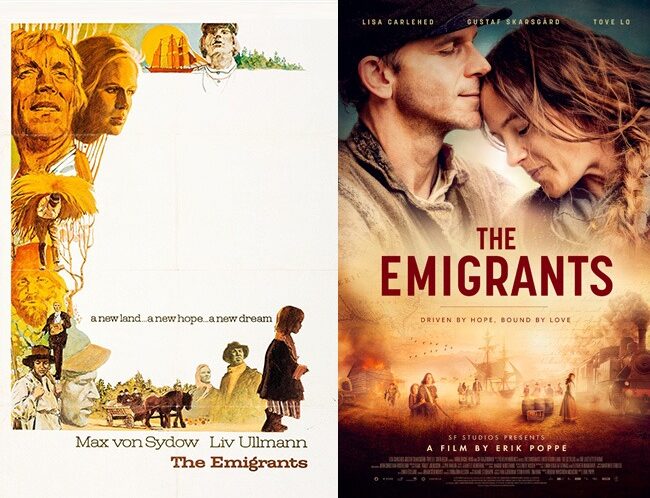 Begin your “Emigrants” journey along the St. Croix River in Taylors Falls, where hundreds of thousands of immigrants landed before traveling west to settle their new homesteads.

Imagine yourself as Karl Oskar or Kristina, taking in the sights and sounds of the river rapids and a bustling village. This area was thick with forests and lakes, very similar to Sweden. The location of what is now called Taylors Falls was created thousands of years ago by glaciers. Native Americans traveled through this area. The Chippewa Indians called this land Kichi Saga, meaning fair and lovely waters. The earliest white population in the area were fur traders then lumberers. Taylors Falls first saw these settlements in 1838, with most populations from New England, on the Eastern end of the United States.

Explore the National Historic District known as Angel Hill. Explore beautiful homes, the Folsom House Historic Site*, historic schoolhouse, railroad depot, Methodist Church, and Old Jail Bed and Breakfast, all built between 1850 and 1900 in the traditional New England style. Mr. Folsom was influential in the lumbering business and the establishment of Taylors Falls and Chisago County. He owned a great deal of land that immigrants rented and boarding houses where they lived.

*Some of these sites are seasonal 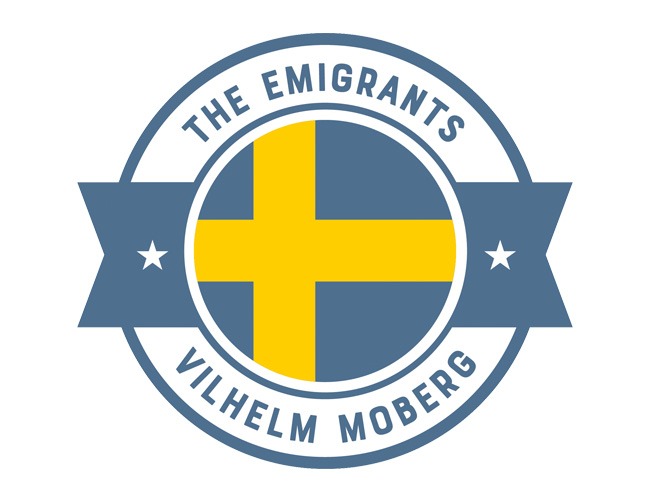 The Chisago Lakes area is proud to promote "The Emigrants" novels by Vilhelm Moberg. When you see this stamp you'll know the location, event or information provided is relative to these historic novels. 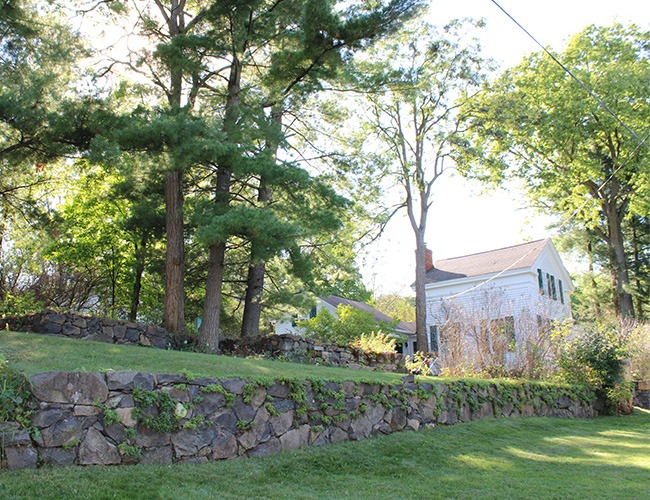 While you’re exploring Angel Hill, take care to notice the Stone Retaining Walls, built by Swedish immigrants in the Swedish tradition with no mortar. 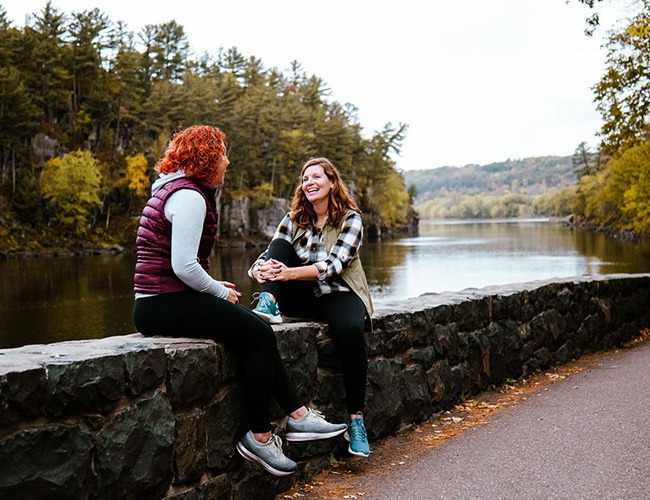 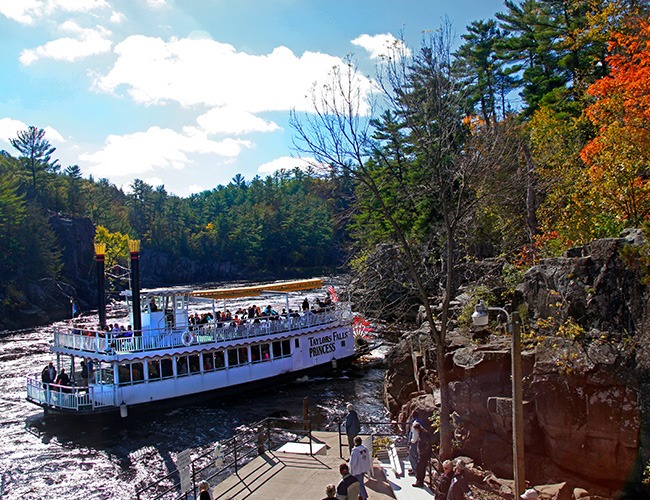 Learn the early history of the area during your tour and view first-hand what the immigrants saw when they arrived by boat. Open May to mid-October.

This trail travels over 20 miles west, following the “trail” that thousands of immigrants traveled to new homesteads in Minnesota. Then drive west on CountyRd. 82 from Taylors Falls towards Center City (7 mi/11.3 km). As you drive you’ll see old farms and barns, and beautiful scenery.

This was a farming community and at one time a hub for growing potatoes. The town was named after a transient farm worker, Jacob Shafer, who was from Sweden and worked as a hay cutter. Shafer is a stop on the Swedish Immigrant Trail.

Founded in 1851 on the shores of Kichi-Saga, “The Big Lake,” it is the oldest continuously settled Swedish community in Minnesota. As you enter Center City you’ll see a cemetery on your left and Chisago Lakes Lutheran Church. The church was organized on May 12, 1854, with a congregation of about 100. This current church was built in 1889. Book a tour for a small fee to visit their Heritage Room.

Lindström was founded in 1894 and named after Daniel Lindström, a Swedish immigrant to the area. Turn north onto Olinda Trail and drive 1 mi. (1.6 km.) to visit Allemansrätt Swedish Heritage Park.

In Swedish, Allemansrätt means the right to roam in the wilderness with a “Do Not Disturb or Destroy Nature” philosophy. Allemansrätt Park occupies 125 acres of wilderness, including over 10,000 feet of shoreline on three lakes. Allemansrätt has several miles of trails and showcases unique ecological features such as glacial eskers and ephemeral wetlands, a high-quality oak forest, over 100 species of birds, and diverse wildlife.

Visit the historic 1890s Anderson House and explore 19 interpretive panels, uniquely covering the house’s door and windows, that tells the story of the property, the immigrant family that settled there, and the notable person who visited in 1854: the first Swede in Minnesota, Jacob Fahlström, visited this site in 1854 when he knocked on the door of John and Maja Lena Anderson. He had not spoken a word of Swedish for forty years and had come to the Chisago Lakes settlement because of some Chippewa friends who traveled far and wide and told him some of “his kind of people” had settled there.

Drive west on Lake Blvd. and stop at the 1908 water tower that was converted to a Swedish Coffee Pot in 1992. There is an interpretive panel and public area beneath the water tower. “Välkommen till Lindström…Where the Kaffe’s Always On!”

In 2013, Lindström revealed four statues to honor Swedish pioneers, created by sculptor Ian Dudley. At this location, Per Andersson, Per’s half-brother Daniel Lindström and Erik Norelius, all from Hassela, Sweden. Per Andersson arrived in Taylors Falls on April 23, 1851. He was a real-life Karl Oskar Nilsson.

This was a farming community platted in 1857. It became a tourist resort destination after the 1880 railroad was built.

Vilhelm Moberg, the famous Swedish author, and historian spent much of 1948 traveling around Chisago Lakes on his bicycle while doing research for his four-part Emigrant novels. The Moberg statue was created by sculptor Ian Dudley and Moberg Park was dedicated on September 7, 1996. The park also includes a caboose exhibit, pavilion, drinking fountain, and green space. 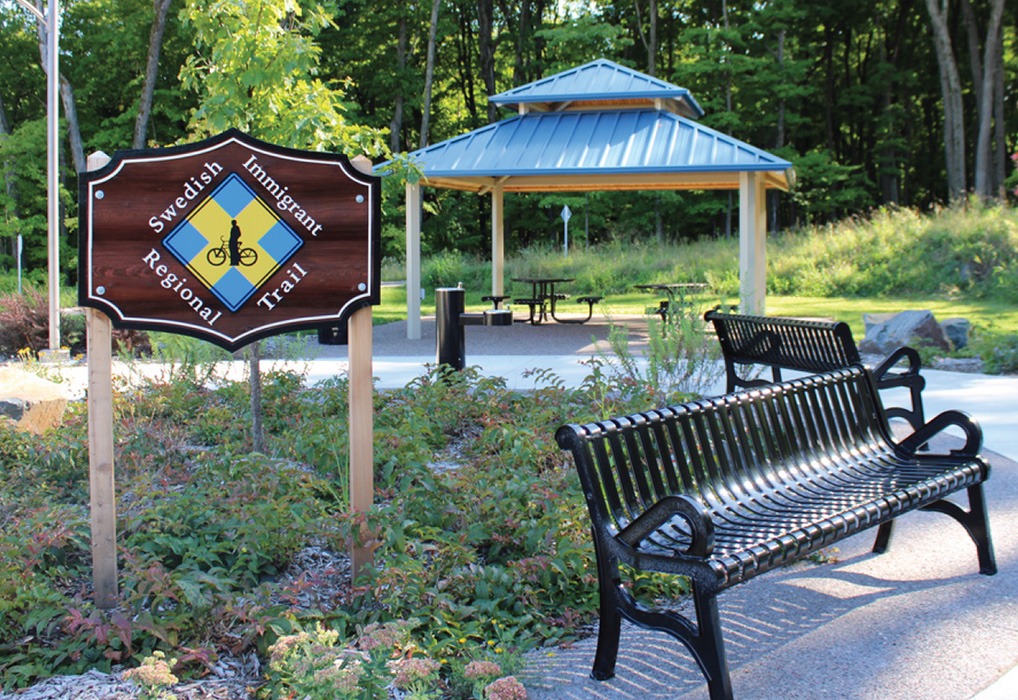 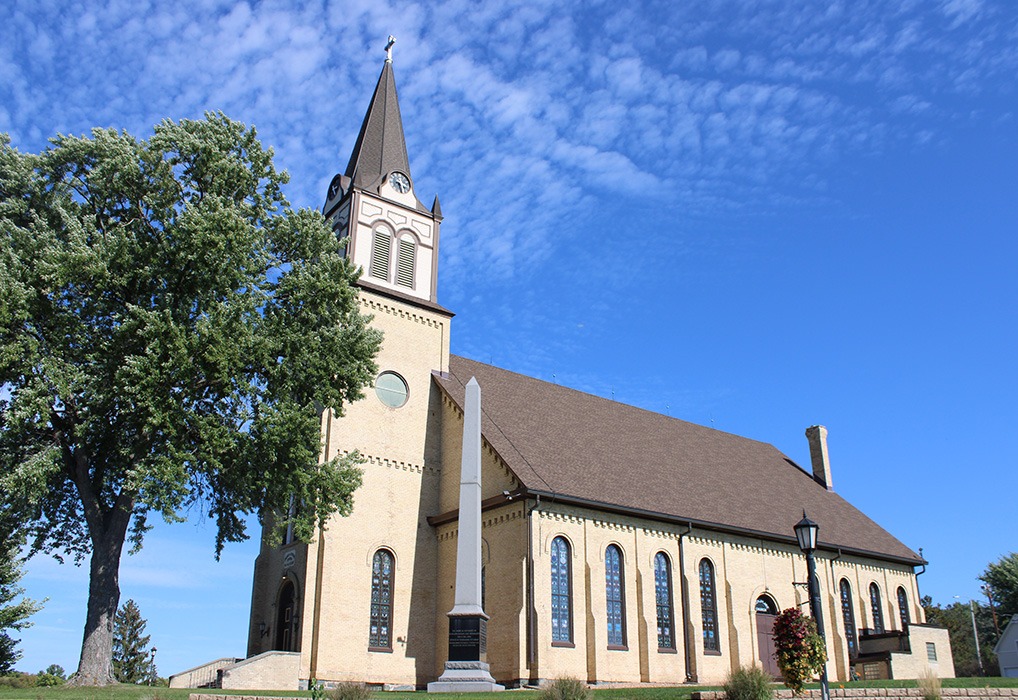 The obelisk outside the church is Per Berg's Monument that marks the site of the log barn where the first 100 Swedes organized. 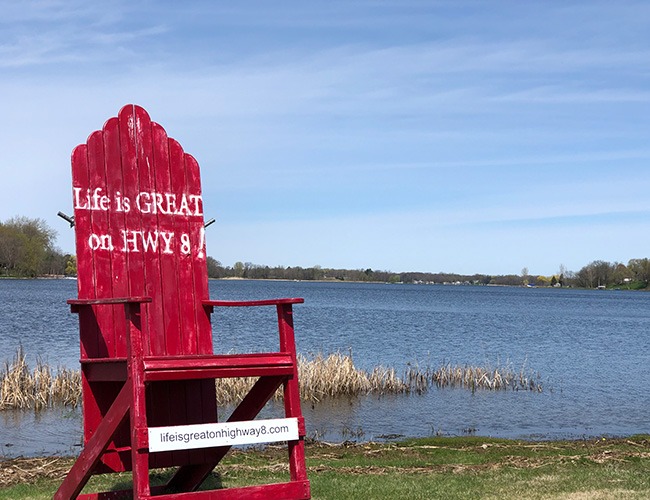 Drive past the church on Hwy. 82 and stop at the large red Adirondack chair to take in North Center Lake 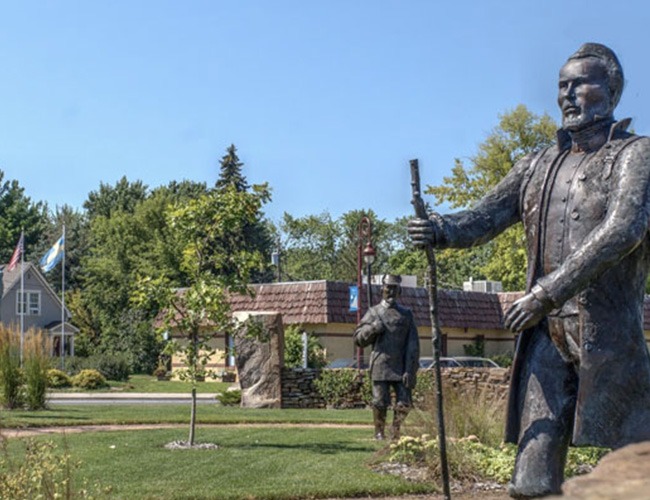 Back to Lindström, America's "Little Sweden".

This statue is a replica of the original statue in Karlshamn, Sweden. Karl Oskar Nilsson and his wife Kristina are the main fictitious characters in the Moberg novels. Kristina is looking back to her homeland of Sweden and Karl Oskar is looking forward to the new land, “Amerika!” The boulder is from Duvemåla (Småland) Sweden. Stop in at ‘The Chisago County Press’ newspaper office next to the Karl Oskar and Kristina statue to view the desk Vilhelm Moberg used here in Chisago Lakes in 1948.

Explore hundreds of years of local history at the Chisago County Historical Society! Part museum, part gift shop, part research library, there is so much to see and learn. CCHS offers rotating exhibits, classes, and events.

Visit the historic home of Gustaf Anderson while choosing from a variety of breakfast, lunch, and ice cream options! Gustaf came from Stockholm in 1864. He participated in the Montana Gold Rush and struck it rich! He was known as “Guldgubben” (The Old Gold Man).

Head south out of Lindström on Olinda Trail to visit the “Karl Oskar House” (Nya Duvemåla). Find a parking spot then explore the Karl Oskar House and surrounding area. Swedish immigrant Carl Linn built this home in 1854, and it became the inspiration for the Minnesota home of the Karl Oskar family in Swedish author Vilhelm Moberg’s series The Emigrants. The house and books became synonymous with one another and the Linn family farmhouse was moved from its original site 1/4 mile west to this location in 1995 and eventually renamed the Karl Oskar House.

Home of the award-winning Best Swedish Donut in Minnesota, the Lindström Bakery is a must-stop! 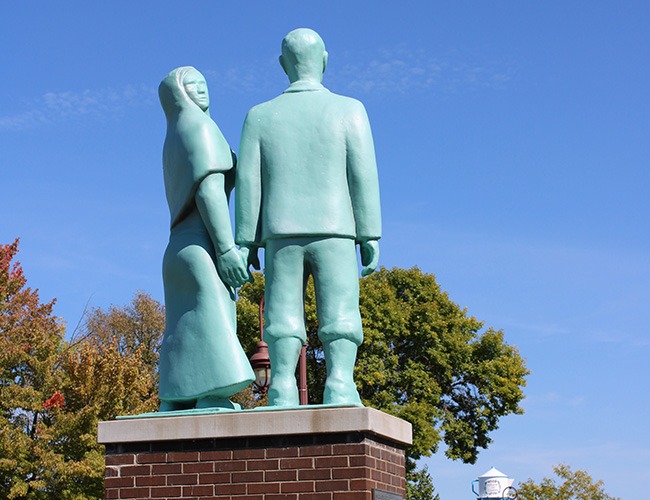 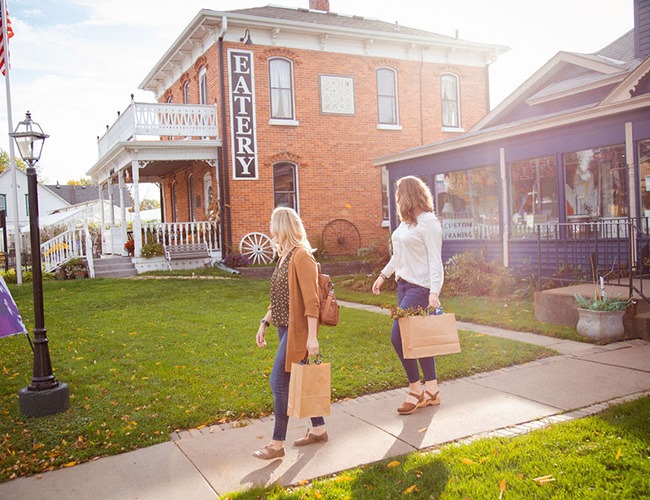 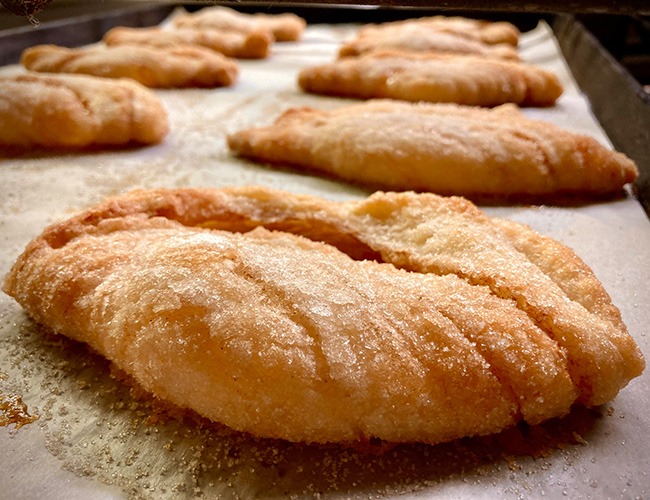 Lindström Bakery is a must-stop!

Drive or walk the trails ⅛ mile east of Ki-Chi-Saga Park on Glader Blvd. to Glader Cemetery. This is the oldest Swedish pioneer cemetery in Minnesota. Karl Oskar and Kristina Nilsson from The Emigrants series are fictionally buried here! Park on the roadside then take some time to explore the tombstones while listening to the sounds of South Center Lake. Find the Linn tombstone to see the resting place of Lena Kajsa and Carl Linn.

Meaning “old farm” in Swedish, the Gammelgården Museum is an open-air museum devoted to preserving, presenting, and promoting Swedish immigrant heritage in the United States. Visit the museum to get a feeling of what life in Minnesota would have been like for Karl Oskar and Kristina. Don’t miss the “Butik” gift shop, featuring Scandinavian gifts and treats!

Sign up to get updates about what’s happening in the Chisago Lakes area.